skip to main | skip to sidebar

It was a soft April night. The candle spluttered as a cool wind oozedthrough the open window. Barefoot on the chair stood Albert, a lonely man with thin hair and wearing a short-sleeved shirt. A noose hung around his neck. It was three minutes past nine.

With one final look at the snapped lilies sprinkled over the floor, he kicked the chair back with the heel of his foot. As everything faded he thought he saw a flock of bluebirds take off and fly out of thewindow. Then he was in the long white corridor. He asked Nurse Samuel,"Is it ok if Mildred has tea and toast?"

When the light returned Albert was still on the chair, the noose slack around his neck. 'I'm dreaming,' he thought, and then he looked at hiswatch. It was three minutes past nine. Outside it was still a hot dreary September night.

"I don't understand," he muttered. "Oh, what difference does it make?"He kicked the back of the chair once more. The gentle breeze in theroom died as the noose tightened and everything became hot and airless.

'She was weeping again,' thought Albert as he opened his eyes."Nurse," he said. "Do you think she'll come out of it?"

And then he realised. Same noose. Same chair.

He took the noose from his neck and swung it away. Outside it was still a chilly autumn evening. On a chest of drawers in the corner wasa vase full of lilies, Mildred's favourites. He took them out, snapped them in two and scattered them over the floor.

"See that," said Albert and climbed back on the chair. He slipped the noose around his neck, and then quickly stood down. He gathered the broken flowers up. "I'm sorry Mildred," he said. "I know how you loved lilies." Placing them on the drawers beside the vase, he said, "It will do, it will do."

It was three minutes past nine. Noose around his neck, he kicked the back of the chair with his heel. As the blackness folded over him he heard the pounding feet running down the long white corridor. He feltthe hand on his shoulder. "Stay here," said Nurse Samuel. "We'll come and get you as soon as she's okay."

Albert remembered walking through a park. Mildred's peach pink lipstick. The bluebirds cascading behind her head as the winter evening settled in. A smell of smoke, and in the trees a yellowishfog. Her green Wellingtons boots. The way she took his hand in hers as she said yes.

Albert opened his eyes. Snakes of frost patterned the window and Albert shivered. From his place on the chair he looked around the room, at the filthy, sheet-less bed, the piles of dirty clothes, his life tipped out all over the floor, and there in the corner, her vase,and the long slender lilies inside.

After leaving the States a lifetime ago, Rupert has now settled in London with a quill, two dogs, and a monkey. But sadly no ink.
Posted by Southern Fried Weirdness Online at 4:07 PM

Southern Fried Weirdness is currently undergoing some changes. Instead of a weekly webzine, we are going to publish quarterly at www.southernfriedweirdness.com. The updated submission guidelines are available here.

*Southern Fried Weirdness has changed formats. Please go to www.southernfriedweirdness.com for more information. This site will remain available as part of the archives. 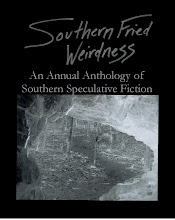